In our Electric Bike Guide, we break down some of the best benefits of riding an ebike, and explain the different kinds you can choose from. We’ll also cover how electric bikes work and how you should decide which model is right for you. Let’s get started.

Why buy an electric bike?

Electric bikes give riders tons of great benefits that anyone can appreciate. Check out some of the top reasons why people love ebikes below:

Electric bikes help you ride at faster speeds than you would easily sustain normally. Riding faster means you’ll spend less time on your commute to work, you’ll be able to cover more ground, and you’ll have a ton more fun.

Because you’ll be moving quicker and getting less tired, you can ride larger distances more often. If you want to ride your bike to work but it’s a little too far, an ebike is the perfect solution. If you want to ride more trails in a single session or just explore a bit further from home, an electric bike is just what you need.

Get assistance when you want it

The electric motor kicks in to provide a helpful boost when you want some assistance. However, if you want to do it all yourself, ebikes still function just like normal bikes and you can choose not to use the motor if you want more of a challenge.

Who are electric bikes perfect for?

Electric bikes are great for all kinds of riders, and as long as you want to ride a bike, there’s an ebike for you. 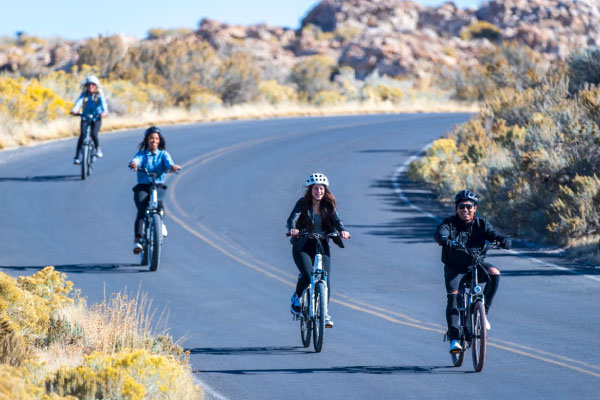 Even if you aren’t planning to ride big distances or at top speeds, riding an electric bike can make any trip around the park or neighborhood more enjoyable.

Recreational riders who just want to get some fresh air and exercise love how ebikes help them start riding more often. If you live in a hilly area which makes riding difficult, grab an ebike and start enjoying life on two wheels again. 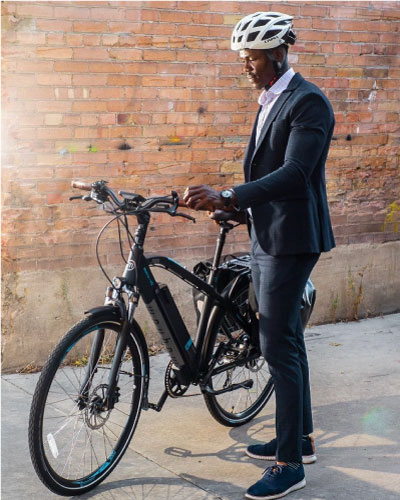 People who ride their bikes to work are some of the most common electric bike users.

Whether you already commute on two wheels or you’d like to start, ebikes are a great way to get exercise, avoid sitting in traffic, and cut down on expenses.

When you can ride 20 miles with ease at a quick pace, the distance to work is non longer an issue. 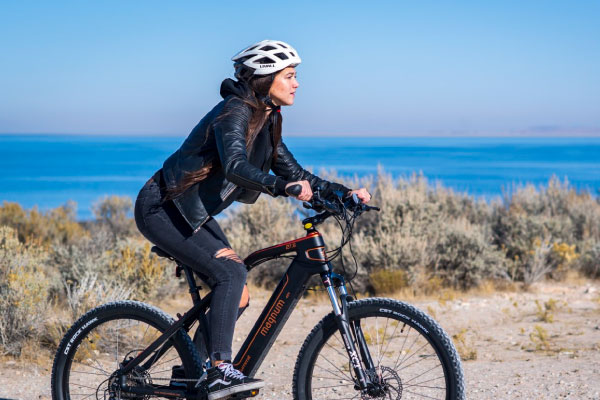 If you want a bike that can help boost you up the big climbs so you can enjoy more downhills, you’ll love expanding your limits with an electric mountain bike.

How do electric bikes work?

We want to demystify ebikes so you can feel confident in your purchase. Read on for an overview of how electric bikes work. 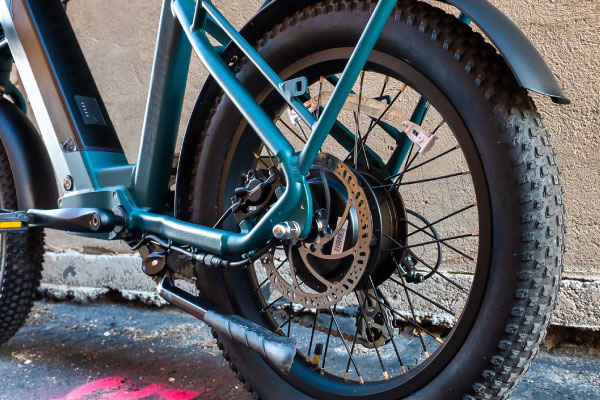 The electric motors are what make these ebikes extra capable and fun. There are many different kinds of motors, some which you engage by pedaling and some that you can engage with a throttle. Motors will often have different levels of assistance so you can fine tune your speed and effort level.

One of the key specs to take note of is how many Nm of torque the motor puts out. The more torque the motor has, the easier you’ll be able to ride up hills and carry cargo. Most ebike motors range between 40-70 Nm of torque, but if you’re thinking about an electric mountain bike or you live in a particularly hilly region, you might want to consider a model on the higher side of that range.

Another key spec is how many watts the motor puts out. Most electric bike motors put out between 250-750 watts, and just like the amount of torque, more watts mean more power.

That’s not to say that ebikes with less torque or watts aren’t as good. More powerful motors use more battery, so it’s all about finding the right balance. Depending on the riding you’re doing, you may not need the highest levels of power. It all depends where and how you ride your ebike. 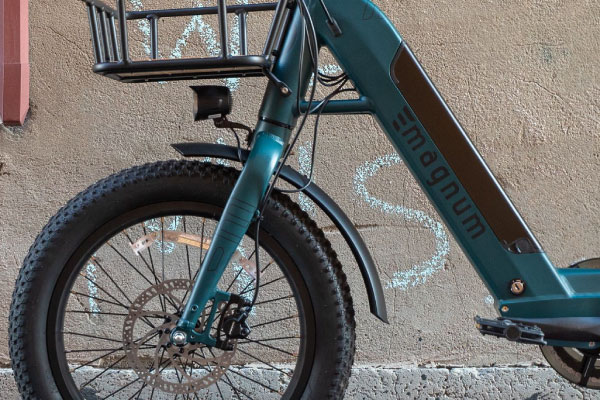 Your ebike motor won’t work without electricity, so it’s important to take a look at the electric bike battery as well. Ebike battery capacity is measured in watt hours (Wh), and the more watt hours the battery has the longer it will last. Batteries typically fall somewhere in the 200-700 Wh range.

Another thing to look at when comparing ebike batteries is charge time. It’s always nice to have a fast-charging battery so you can spend less time waiting and more time riding. Common recharge times (empty to full charge) are around 5-8 hours, but you can often still get in a great ride with a half charge as well.

Lots of riders want to know a battery’s range. But while there is often a maximum range listed for a certain model, it’s important to remember that there are a lot of factors that can change your ebike’s range.

Besides the watts in your motor and the watt hours in your battery, range is influenced heavily by factors like how much assistance you use, how hilly the terrain is, and how much weight you’re carrying. Use the maximum range as a starting place in understanding the limits of your electric bike. 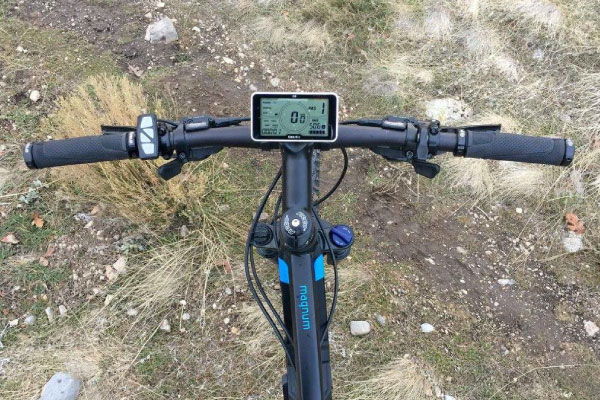 In order to operate the motor, most electric bikes use a simple, handlebar-mounted controller. These controllers allow you to select your level of assistnace from the motor, but they often also display helpful information like your battery level and current speed.

How do I choose an electric bike?

Now that you have an idea of what to look out for when searching for an electric bike, how do you actually go about choosing one? Read on for more info.

Not all electric bikes are the same. Before we talk about terrain-specific styles, it’s important to go over the 3 different ebike classes and what they mean. So, what exactly are the different classes of electric bikes?

Class 1: the motor only engages when pedaling and stops providing assistance at 20mph

Class 2: the motor engages by both pedaling as well as the use of a throttle, and provides assistance up to 20mph

Class 3: the motor only engages when pedaling and provides assistance up to 28mph 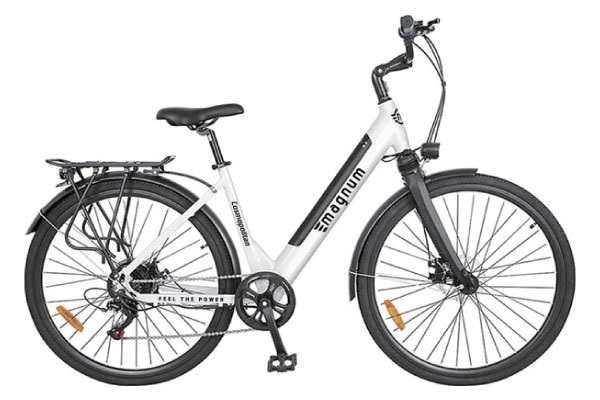 Electric commuter bikes are a wide category that encompases most ebikes. These models are perfect for commuters and recreational riders who mainly stick to paved roads and only occasionally venture on to gravel and dirt.

Electric commuter bikes are typically more comfortable to sit on and ride thanks to wider saddles and a more upright position since they aren’t designed for off-road efficiency. Commuter ebikes often have a rear rack for carrying gear and integrated headlights and taillights that help keep you visible on the roads.

Some companies even make folding electric bikes that give you all the added assistance benefits with the portability of an unban folding bike. If you want to get more exercise and enjoy riding a bike more than ever, you’ll love this style of ebike. 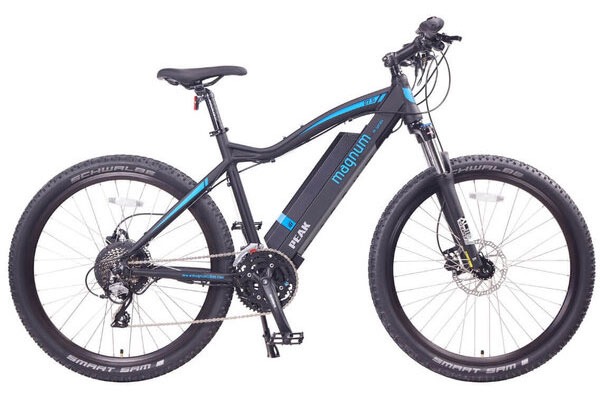 If you want to ride off-road, an electric mountain bike is the way to go. These models are super capable on rough roads and challenging trails, and have great features that help you ride faster and more confidently.

These models usually have front suspension or dual suspension to soak up the bumps and keep you in control as you ride over rocks, roots, and bumpy gravel.

They also have a more forward position that helps you generate more power and better stability off-road. The bigger, grippier tires are perfect for taking on loose terrain and provide extra cushion that helps absorb rough terrain.

Are electric bikes worth the money?

While some premium electric bikes can be quite expensive, there are lots of great companies that make extremely fun and capable ebikes that are much more affordable. Just about everyone who test-rides an ebike can’t stop smiling! When you enjoy something you’ll do it more often, and riding an electric bike is a great investment in a happier, healthier lifestyle.

How long do electric bikes last?

The range of an electric bike can vary widely. Most models will give you at least 20 miles of assistance, but many models have much longer ranges. Range depends on a number of factors that you can read about here (anchor link), but keep in mind that all of these ebike models work perfectly well as regular bikes even if you run out of juice.

How fast do electric bikes go?

Electric bikes stop providing assistance from the motor at either 20 or 28mph, depending on the class of ebike you have. Check out the breakdown of eclectic bike classes here (anchor link). You can also pedal faster than the max assisted speeds, but you won’t get extra help.

Do you pedal an electric bike?

Electric bikes work the same as regular bikes, so you can always pedal like you normally would. Some ebikes require you to pedal to engage the motor, while others have a throttle option that allows you to relax more. Check out the different ebike classes here to learn more. (anchor link).

Absolutely! Even with a bit of assistance from the motor, you’re still out there getting exercise as you pedal. And because ebikes still work perfectly well without using the motor, you can get in more of a workout anytime you like.

Can electric bikes go up hills?

Yes, electric bikes can certainly help you get up the hills in your area. If you live in a hilly region or want to go mountain biking, it’s best to look for a model with enough torque to help you power up the climbs with ease.